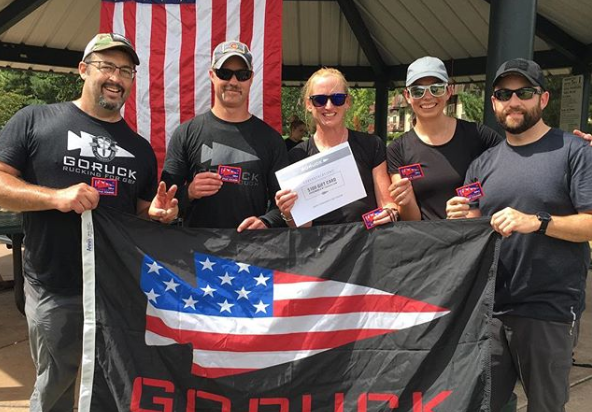 Ms. Loni Harris (second from the right) celebrates finishing her competition with her team.

Greeley West math teacher Ms. Loni Harris endured a 50-mile course through Denver over labor day weekend and lived to tell the tale. Even more impressive: she did completed the trek in under 20 hours.

Harris helped a team of five finish in third place at the GORUCK run, where participants are required to wear a 10-20 pound backpack from start to finish.

Rucking is an exercise where you carry a weighted bag to build endurance. Harris has been training for this run with her husband since March, doing four to five mile rucks twice a week. The Denver run wasn’t her first course, but it was definitely the longest she had completed.

Starting on Friday, August 31, Harris and her team plotted the 17 checkpoints they needed to complete and began a journey through the city. Of the checkpoints, she enjoyed going to the Mile High Stadium the most. “Our halfway point was the Broncos stadium and I’ve never actually been to a game. To be that close way pretty cool,” Harris said.

Every team must make their own route. So Harris uploaded the stops into an app to find the fastest route. The last six miles on Saturday morning were the hardest since it was nearly all up hill and Harris had been walking for over 10 hours. “At times it wasn’t very fun just because it’s a lot of work. I can now look back on it and remember how much fun it really was,” Harris said.

Harris’ team finished third out of 27 teams. Five were disqualified for not finishing on time or without their team. It was no problem for Harris’ team, who finished in 15 ½ hours.
Finishing was a weight off Harris’ shoulders, literally.