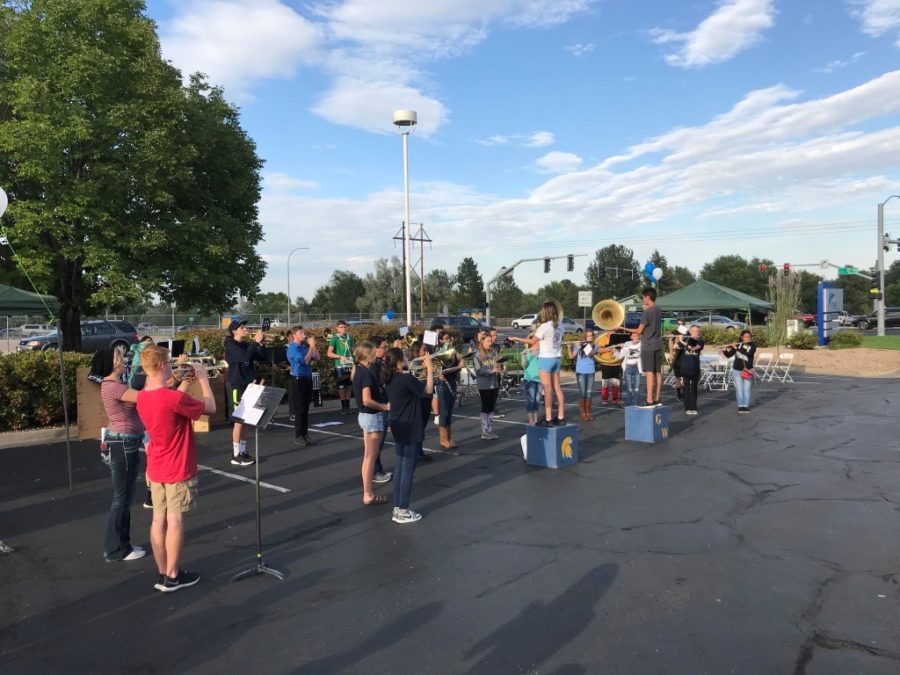 The Greeley West band performs at the kick-off event for 4C last week.

On September 16, the Greeley West band, Poms and cheerleaders had the opportunity to perform at the kick-off celebration for the 4C bond, which would help fund a new Greeley West High School building if approved by voters.

This was a great chance for District 6 and the Greeley/Evans community to see what West was all about, with students showing their spirit and support for a new school. Some kids after the performance were even interviewed about what they thought of their current school and how it impacted them educationally.

This was an especially great experience for the Poms and band to perform their show for the marching band contest this Saturday.  It helped the Poms to get in sync with the music and prepare for their first performance with the marching band at contest. This will be the first time the Poms have stepped in because of the absence of a color guard team.

Junior Pom Chloe Job said, “I’m glad that we got to represent West as a whole, and it was really fun dancing with the band as it is a different feel, as we usually dance to pop or hip-hop.”

Because of the band’s big loss of seniors this year, it has taken a toll on their numbers, affecting their ability to quickly learn drill. But the band is still playing strong and this event was a great way for the band to see what they are capable of and their potential for the rest of the season.

“I think the band did a great job on Monday, and they have really come a long way from the beginning of the season, and the audience seemed to really enjoy the band… also its great to have the Poms with us this year, making our show more exciting,” band director Mr. Chet Arthur said.

After the band and Poms performance, superintendent Dr. Deirdre Pilch came and recognized the band, thanking them for playing for the community and supporting the kickoff of the 4C bond.