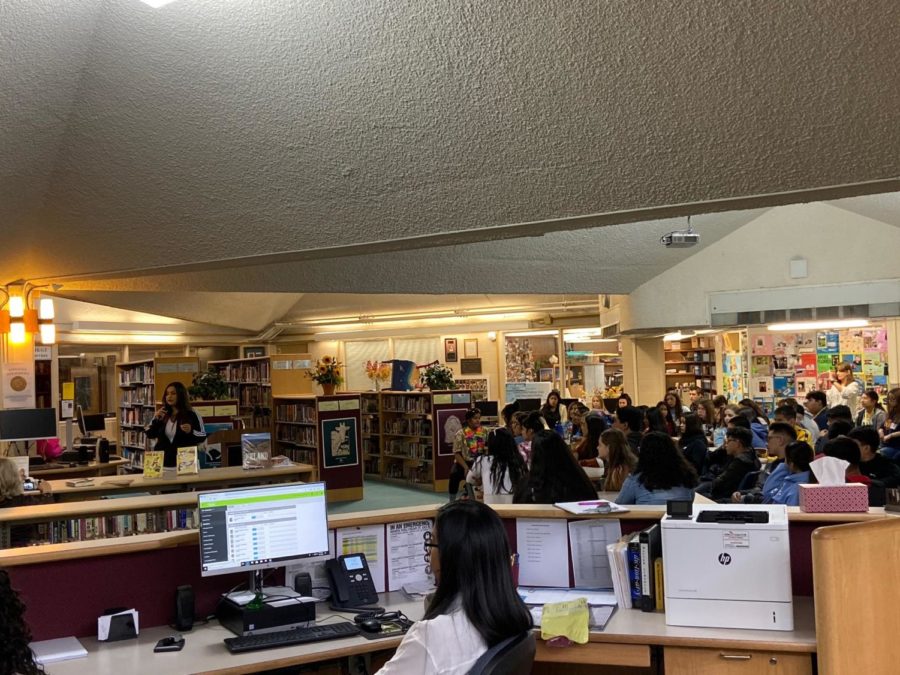 Los Angeles-based Chicana poet and activist Angela Aguirre made a tour stop at the Greeley West library on Tuesday.

Aguirre, the self-proclaimed “homegirl with a message,” is known by many as the Millennial Mija. She flew out to Greeley this week in a partnership with the High Plains Library District and spoke to a group of AVID and poetry students about something near and dear to her heart.

“I just really wanted to bring a message of hope and empowerment to youth,” Aguirre emphasized.

Aguirre started the hour by speaking about her ancestors. She reminisced about her parents, especially her father, who inspired her to do what she does so well today. His own civil activism, knowing where you come from, and public speaking prompted her to get out into the world to share her “Palabra,” her word, and continue that chain of inspiration and empowerment.

During her presentation, Aguirre also read a few of her poems out of her book, Confessions of a Firework, among them one about a daughter who lost her father, “Dear, Angela,” a letter to herself when she was feeling suicidal, and the crowd-favorite, “Chingona Fire.”

The Millennial Mija reached many students and teachers, with powerful messages about love and loss, depression and anxiety, and female empowerment.  The idea of being able to love and accept yourself was an essential part of her poetry and her message.

Sophomore Raelene Castillo reflected that “she inspired me because people want to shut down confidence and I liked how she said that we won’t be silenced, we won’t be shut down, that it’s okay to be that way.”

The former teacher made a point to interact with her audience and let the students, especially the young women, know that they are valued, and that their voices are powerful. Aguirre even stayed afterwards to speak with students and hear their stories.

Aguirre articulated, “The people that came up to me and hugged me and cried- that’s why I came.”