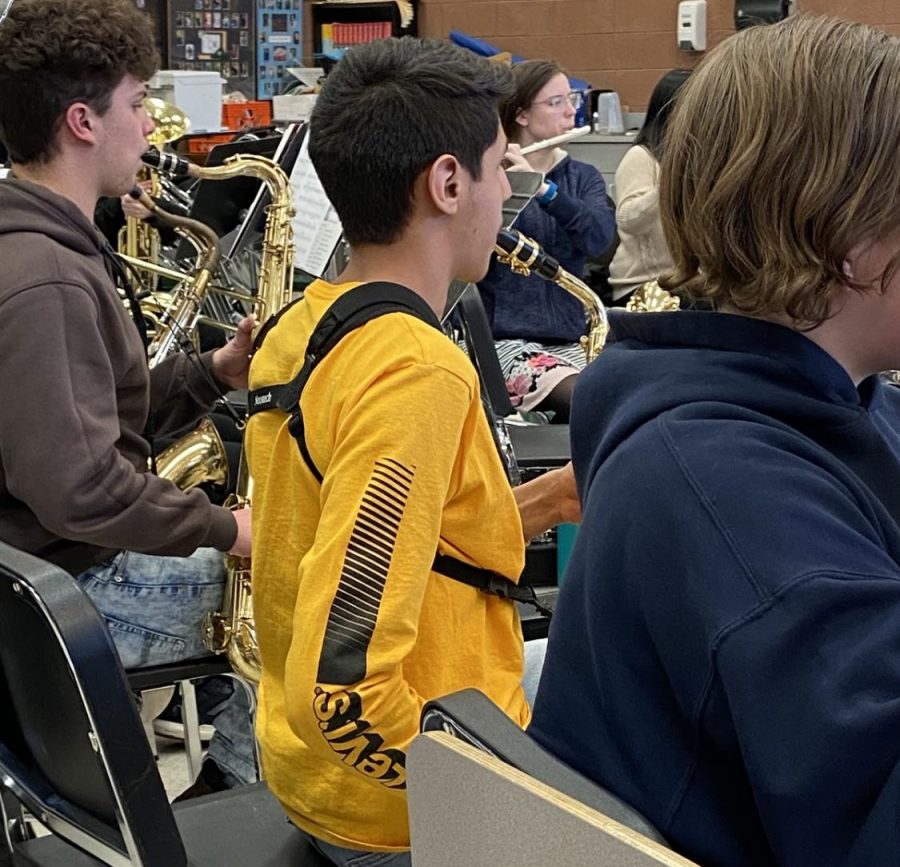 Junior Caleb Sandoval plays with the Greeley West band during class last week. Sandoval will be a first-chair at All-City Band in February.

For Greeley West junior Caleb Sandoval, being the best baritone saxophone player in the school is not enough.  That’s why he is preparing – along with many other Spartan band members – to be a part of the Greeley All-City Honor Band.

Sandoval is the first chair for all baritone saxes which makes him the best of any other person that auditioned with the same instrument. “It’s very special because even though it’s not the most prestigious group, I feel like I can get out of my comfort zone and try new things,” Sandoval said.

Sandoval, who has been in band since he was in sixth grade and was recently the drum major for Greeley West’s marching band, is using the smaller city group to have an opportunity at future performances on a bigger scale.

This honored group not only means a huge amount to Sandoval, but it gives him motivation to do even better. “I’m motivated and very confident in what I am able to do with this group and that will push me to audition for the Combined League group as well as the All-State group next year,” Sandoval said.

Sandoval really likes to get out there and try new things. He definitely makes the most out of these situations and events. “I auditioned because I felt that it would be a good opportunity to improve as a performer and that I would get a chance to meet other people. I would also learn different ways to improve my playing,” Sandoval said.

Sandoval has his eyes set on the future and knows that this is only the beginning in his music career. “I feel like not just meeting new people will help, but getting critiqued by other teachers and the clinician will even further improve my playing skills,” Sandoval said.

Sandoval will put his best foot forward and show the city of Greeley the kind of player he truly is.  With the February 12 concert right around the corner, Sandoval will prepare five different songs in order to be prepared for the performance. In the upcoming weeks, he will have to make sure the pieces are perfect to ensure an amazing performance for the people of Greeley .